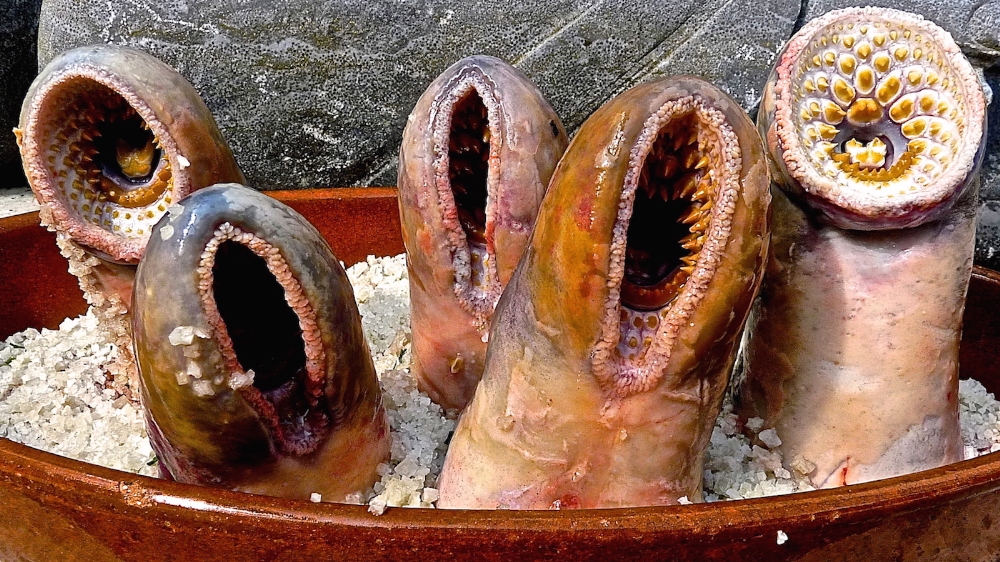 The monsters in the image below are sea lampreys. Also known as “sea leeks,” they look like a type of eel that ascended from hell to live in Earth’s rivers and seas, including the ones in the Netherlands. It can grow as long as three feet and has a circular mouth filled with teeth, which enables it to attach like a leech to salmon, cod, whales, and dolphins to drink their blood. It often makes its host so weak that it dies. The male sea lamprey is not a romantic: To propagate, he attaches to a female that swims by, and then wraps himself around her to squeeze the eggs out of her body. Subsequently, he ejaculates his semen over the eggs, after which both parents die.

There aren’t many animals as frightening as the sea lamprey. Nevertheless, there are people that admire this animal so much that they gather to collectively honor it—and to eat it. These people belong to the Sea Lamprey Society.

I discovered Zeeprik Genootschap, a.k.a the Sea Lamprey Society, accidentally when I was searching for more information about this nightmare critter. It was established two years ago by artist and food archeologist Henri Roquas. For several reasons, Henri has been fascinated by the sea lamprey. As an artist, he thinks that the picture of a sea lamprey attached to a larger fish is “a glorious image.” Also, as a food archeologist, he thinks it’s essential that the sea lamprey shouldn’t be forgotten. Sea lamprey was once widely eaten, but since the 19th century, it can’t be found in the Netherlands.

On a Sunday earlier this month, Henri organized a sea lamprey dinner for the entire society, which has approximately 40 members. For the first time in 100 years, sea lamprey would be prepared in the Netherlands again. These sea lampreys came from the French Aquitaine, the only area in Europe that has sea lampreys in large numbers. (This is thanks to the chefs, lamprey fishermen, and conservationists there who made a collective effort 25 years ago to make the region sea lamprey-friendly again.) On the menu there were four sea lamprey dishes; for dessert, there was a jellyfish parfait. I decided to become a member of the society and joined the dinner.

The dinner took place in Amsterdam in the PUNT/TAAK work- and art space. Artists painted sea lampreys on the walls, and a lecture was given about the sea lamprey in the Netherlands. After this, it was time to devour the animal. All of the dishes were prepared by Henri and another chef.

Sea lamprey doesn’t taste like fish at all, but the texture resembles the slow-cooked beefsteak in my dad’s stew. This was also the reason why people once enjoyed eating it. Meat was expensive, but also wasn’t allowed to be eaten during certain abstention periods like Lent; luckily, sea lamprey resembled meat a lot. In addition to common folk, kings and other elites also thoroughly enjoyed eating it. Even Tyrion Lannister of Games of Thrones eats a plate of lamprey pie in season two; British King Henry I allegedly died because he ate too much sea lamprey.

The amuse-bouche, a pate made out of sea lamprey with raw rhubarb, was quite tasty. The starter tasted exquisite too, and resembled the amuse-bouche; when the chef explained the preparation of the dish to the society, he stated that it was “a type of huzarensalade (Dutch potato salad).”

The best part of this event was the fact that everyone acted so routine about all of this. At my table, a woman told me that she gets all of her food from nature—that she often eats crow, and that swan is truly delicious. Presently, she fancies roe deer.

The idea initially sounded strange to me, but slowly I came to the realization that the opposite is actually much more strange. The only animals I regularly eat are chicken, beef, and pig, all bred to providing tasteless meat. Henri informed me that the food we consume says a lot about how we categorize the world. I never thought about it as such.

Some of the dishes were somewhat freakish to my usual tastes, but I must admit that the blood sausage in sea lamprey bouillon was incredibly delicious. I asked Henri about the origins of his fascination with sea lamprey. He told me that when he was seven years old he almost drowned, and was saved just in time. On that day, he saw his first sea lamprey.

What’s so special about the sea lamprey is that it’s a “living fossil,” or as Henri prefers to call it, an “immortelle.” This creature has remained more or less the same for 550 million years. It never even evolved into a true fish.

The climax of the dinner was the French sea lamprey dish, in which sea lamprey was stewed for two days and four hours in its own blood, accompanied with some red wine. This was unbelievably delectable; it didn’t taste like either meat or fish, and now that I’m trying, I realize the deficiency of language when trying to explain its flavor. When I asked people around me to make an attempt, they offered words like “ancient” and “earthy” were given. This was mainly because of the blood. One could tell juicy stories about the taste of this blood.

In bygone times, the river lamprey (the somewhat smaller brother of the sea lamprey, similar to the brook lamprey and hagfish) was often used as bait during fishing activities. The lampreys were caught alive; to ensure they would attach themselves to the fishing bucket, a boy continually stirred it. Such a boy often was referred to as a prikkenbijter (lamprey biter), and often was an orphan. When the bait had to be attached to the hook, the boy had to take a lamprey out of the bucket and bite its head off. Because the raw blood of the sea lamprey is bitter in taste, the prikkenbijter received a sweet to eradicate it.

In the contemporary sea lamprey scene, there has been heavy debate about whether or not this was a piece of toffee or different candy, mainly due to the fact that toffee hasn’t existed as long as prikkenbijters have been around.

The parfait tasted like orange and caramel, and it was delicious. There were also tiny slivers of jellyfish in it. Like sea lamprey, the jellyfish is a living fossil, but chewing on jellyfish was a bit much for me. I looked around and saw that everyone around me was eating their dessert in peace, engrossed in conversation. I wanted to bring my hands to my mouth to scream: “HELLO PEOPLE, WE ARE EATING JELLYFISH HERE, OK?” but I didn’t.

It was an exquisite meal, and my stomach was filled with sea lamprey. Outside, a big blue flag embroidered with a sea lamprey fluttered in the wind. Apparently, this is a world I had never heard of—a world that surprised me, but that in actuality was less odd than the one I was used to. Because even though one can eat practically any living thing, I almost always eat the boring things the supermarket provides me with. And that might even be weirder than eating a jawless monster that hasn’t adjusted itself to anything in the last 550 million years, is shockingly grotesque, and has sex in the most frightful way.